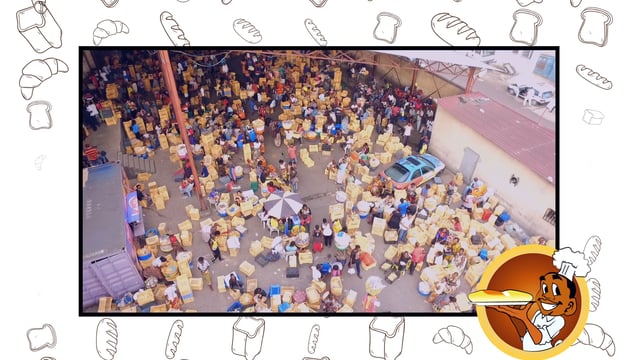 The origin of the Industrial Bread Victory goes back to the year 1980 when Mr. PAPA Dopoulos, Greek subject, decided to install a bakery in the border town, a few years later he will be joined by his nephew Mr. YANGA Dopoulos.

In 1980, the two partners decided to transfer this unit in front of the large post office under the name of “Bakery Papa” it will be equipped with a metal furnace.

Four years later, in 1988 the Bakery will be transferred to another location, more precisely to the 11th Street to the industrial district in the commune of Limeté, it will also change its name and will become “Bread Bakery Papa” the breads products will know a success glowing with consumers.

It is in 1990 that this unit will take its current name of Bakery “Bread Victory” saw the demand for bread ever increasing the company will enter its industrial phase in 1996, it will become in 2000 a semi-industrial bakery.

In the end it is in 2006 that the victory bread bakery will be transferred to the linguala commune at the intersection of Huileries and Kabinda avenues. New partner integrates the company, which will carry out an extension of the production facilities, which will pass to eight chains of which two electric, the processing capacity is to bring to 200 tons of flour per day making the business bread victory the one of the largest bread-making industries in Africa.